Connecticut Lawsuit Loans – Get the Cash You Need for Your Settlement

Connecticut’s a special state, but when it comes to car accidents, slip and falls, and other cases like them, there’s nothing unique about Connecticut.

Like any other state, this state suffers car crashes and slip and falls and all other types of cases.

If you were hurt in a case like this in Connecticut and you’ve hired an attorney, you can get a lawsuit loan from Delta Lawsuit Loans.

It takes just a day to get cash if you qualify and are approved––months sooner than if you waited to settle.

No matter which case, in particular, you were involved in, if you were injured in Connecticut and hired a lawyer, you can get help from us.

We can get you the cash you need without forcing you to accept the first offer that comes your way.

Car Accidents and Injuries in Connecticut

According to UConn’s Connecticut Crash Data Repository, there were 112,112 crashes in Connecticut in 2019, involving 266,945 people.

Of those crashes, 27,246 resulted in some type of injury or death.

One in every 13 people in Connecticut was involved in an accident in 2019, so it’s not shocking that you may be one of them.

After you’re in an accident, you’ve got to make sure you and everyone else involved are safe.

If anyone was hurt or if property damage was at least $1,000, you have five days to report the accident.

Once you’re safe and well, you can consult with an attorney to explore your options for recovering your costs, whether they be medical bills, lost wages, or damage to the vehicle or other property.

Once you hire a lawyer, you can also apply for a car accident loan.

After the accident, the State of Connecticut gives you two years to file a lawsuit, whether for your injuries or for vehicle damage.

You should give yourself ample time before that deadline because it takes time to prepare a lawsuit and even to decide whether to sue.

Connecticut has a modified comparative negligence rule when it comes to car accidents.

The amount you can collect for your damages is reduced by the percentage of the crash for which you were responsible.

But because Connecticut is a modified comparative negligence state, that rule works until you’re more than 50 percent responsible. At that point, you can’t collect any damages.

We’ll discuss details like these with your lawyer to decide whether to offer Connecticut pre-settlement funding for your case. If you’re approved, we’ll get you your money in as little as a day.

And once you get the money, it’s yours to use for whatever you’d like.

Whether it’s medical bills, lost wages, other expenses, or anything else is completely up to you.

Slip and Falls in the State of Connecticut 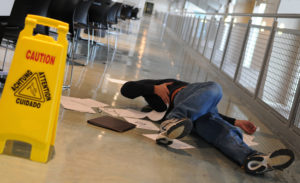 Slip and falls, also called premises liability cases, involve one person being injured on another person’s or entity’s property.

If you were involved in such a case in Connecticut, there are some state-specific laws of which you should be aware.

Just as with car accidents, Connecticut has a modified comparative negligence law for slip and falls.

If you fell and suffered $15,000 worth of damages, but you should have noticed a cone blocking off the area in which you fell, the property owner can argue you were 40 percent responsible for the injury.

And if he or she can successfully argue you were more than 50 percent responsible for your injury, he or she won’t have to give you a dime.

Also the same as with car accidents, you’ve got two years to file a lawsuit after a slip and fall in Connecticut, and the clock starts the day of the accident.

You probably won’t be able to actually start the process of considering a lawsuit the day of your accident––you’ll be busy being treated for the injuries the accident caused.

But as soon as you’re able, you should start that process by hiring a lawyer and discussing your options because that two-year deadline doesn’t leave much wiggle room if you don’t make it. It’s pretty close to impossible that you’ll get an extension.

But you should apply sooner rather than later, only for your own wellbeing.

Because while a day is a lot shorter than a year, it still takes a day for whenever you apply. If you apply today, that’s tomorrow, but if you apply a week from now, that’s a week and a day from now.

Some of the Cities We Fund

But there are a ton of cities and towns in the state that aren’t on this list.

And if you were injured in one of them, you’re still eligible for a lawsuit loan; these are just examples.

We can offer pre-settlement cash advances to anyone injured in one of the cases we fund in Connecticut. You can contact us to know more.

Connecticut is a state rich with history. It’s known as the Constitution State because its Fundamental Orders, written in 1639, was the first written constitution in history.

Connecticut’s also home to the first hamburger and Frisbee.

New Haven is home to Yale University, one of the first institutions of higher learning in American history.

Yale and other institutions throughout Connecticut are also home to art museums and other cultural hotspots.

Traditional bank loans check your credit. They check your employment. They want to know what you’ll use the money for. And, most important, they’re due when they’re due, no matter what happens with your lawsuit.

Say it’s January and your bank loan, even if you can get it, is due at the end of the year. By December 31, you may have gotten your settlement. That’s fine.

But what if you’re still waiting to settle? How will you pay back the bank loan?

What if you’ve already lost? What will happen then?

These are questions you won’t have to ask with a Connecticut pre-settlement loans from us.

We won’t check your credit or employment because they’re irrelevant. That’s because you’ll never pay back out of your own pocket.

Plus, right after an accident might be the absolute worst time to have your credit and employment checked.

Once you get the money, you can use it for whatever you want. Because, again, we get paid back out of the settlement, which isn’t affected by your spending habits.

It also means that if you lose, you don’t have to worry about paying us back.

If you lose, you keep the lawsuit loan you got and don’t pay us back anything.

Not half. Not a quarter. Zero. Absolutely nothing.

For more information about our Connecticut lawsuit funding, give us a call today!