Dogs are man’s best friend––but they can also be extremely dangerous if not properly restrained.

When an owner fails to properly restrain his or her dog, the dog can badly injure unsuspecting victims by biting them. This can cause victims serious pain and medical damage and expenses.

About 4.7 million people were victims of dog bites in 2018, but only about 800,000 of them required medical attention.

When a dog bite causes injury due to the owner’s negligence or, in many states, in any case where the dog bites you, you can choose to sue for damages, pain, and suffering.

If you speak to an attorney and hire them, it can still be months or even years before you see any money from a settlement.

A dog bite loan from Delta Lawsuit Loans gives you the freedom to pay off medical bills, make up for any lost wages, or pay for anything else you need in the wake of a dog bite injury.

You can apply for a lawsuit loan on our website or over the phone as soon as you have a lawyer and have cash in hand as soon as the next day.

What to Do If a Dog Bites You? 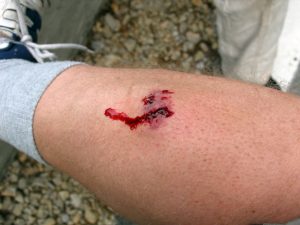 After you suffer a dog bite that breaks the skin, it’s important to make sure to treat your injuries as soon as possible.

That will likely require a trip to the doctor and, in serious cases, a call for an ambulance. It’s important to treat dog bites quickly because, if left untreated with antibiotics, they can become seriously infected, which will only exacerbate the existing injury.

Once you are medically safe, it’s important to think about the possibility of suing someone for a dog bite.

You can speak to a lawyer about the feasibility of a dog bite lawsuit given your case. If you choose to hire a lawyer and are waiting to settle, you become potentially eligible for a personal injury pre-settlement cash advance from Delta Lawsuit Loans, which you can receive as soon as 24 hours after you apply.

What Kinds of Cases Are Included in Dog Bites?

The exact types of cases that are included underdog bites vary from state to state.

Some states limit owners’ liability to injuries caused directly by the dog––usually bites.

Other states have strict-liability rules that broaden owners’ liability to include any injuries caused even indirectly by a dog.

An example would be if a dog wanders into traffic and causes an accident, or if a dog chases a cycler so that he or she ends up crashing.

Some other factors may include if the dog has a history of violence, or if the owner was negligent by, for example, not leashing his or her dog when required by law.

Exceptions to when a victim can sue also depends on the state.

Some common exceptions include dog bites that occur when the victim was on the owner’s property, especially when he or she was trespassing.

Dog-bite victims who provoke the dog are also usually excluded from suing.

You should speak with an attorney to verify the laws in your state. If you’re eligible to file a lawsuit for dog bite and you get a lawyer, you can then become eligible for a lawsuit loan from us.

Why Do Dogs Bite? 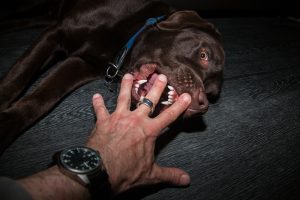 According to the American Veterinary Medical Association, dogs attacked after they are provoked, scared, stressed, or startled.

When the victim provokes or scares the dog, he or she is often excluded from suing in most states. Assuming you are able to sue, the dog probably bit due to stress, being startled, or if it was provoked by someone or something else and bit you.

Once you sue, you probably hope to get some money to pay for your medical bills or anything else soon. But it can take months to years to settle a lawsuit, and you won’t get any money until then. Your bills won’t wait for you to settle, though.

That’s when it’s time to apply for a pre-settlement cash advance. We can get you the cash you need as long as you have a lawyer in as little as a day, and you can use it for whatever you need.

What Kinds of Injuries Do Dog Bites Cause?

Dog bites can cause a number of injuries, infections, and diseases, some more serious than others.

The bite itself can cause bleeding and laceration. Deep bites can cause injury to muscle and even bone. If left untreated with antibiotics, dog bites can become infected.

And unvaccinated dogs can transmit rabies.

The severity of your injuries will affect your case and your settlement.

But all of that doesn’t mean much for you when that could be years from now. By applying for a settlement loan from us today you can have the money you need as soon as tomorrow.

Why a Lawsuit Loan?

First of all, you don’t need to worry about the credit or employment checks that banks will do. That’s because your credit and employment are irrelevant to your ability to repay a pre-settlement cash advance.

We work directly with your attorney so that we get repaid right out of the settlement itself, and not out of your bank account.

Especially after a dog bite injury or another type of injury, you may lose your means of income, including your employment, which could make you a poor candidate for a bank loan.

That’s why the option exists to apply for a lawsuit loan from our company.

We consult with your attorney about the details of your case and get you your money as soon as the day after you apply. That’s a wait you can measure in hours rather than months.

What Can I Use the Money For?

Anything you want. Really, anything!

Our job is to make sure you have a viable case, and we figure that out with your attorney.

But once you’re approved, we don’t care what you use the money for. You could pay off medical bills or make up for wages you’ve lost due to your medical stay and injuries.

You may also have additional expenses that have come up beyond medical treatment due to your injuries.

But you know better than we do what you need money for right now. That’s why we let you make that decision.

Because once you’re approved and you receive your lawsuit loan from our company, it’s your money in every respect.

When we get repaid, it will be right out of the settlement, not out of the money we’ve given you.

The best part? If you end up losing and not receiving a settlement, you won’t have to worry about paying us back. You won’t have to pay us a dime if you don’t win. Contact Us to know more!