Accidents happen all the time in Oklahoma, so if you were in a car accident, slip and fall, or other types of accidents in Oklahoma, you aren’t alone.

This article can help Oklahomans who have been in an accident understand the laws that govern their cases on a fundamental level.

If you were involved in a case and are considering a lawsuit, you should consult with an attorney regarding options specific to your case.

If you were in an accident in Oklahoma and hired a lawyer, you can apply for an Oklahoma lawsuit funding company loan from Delta Lawsuit Loans, an option that plaintiffs in some states don’t have access to.

If you need cash but don’t want to accept an early, lowball offer, an Oklahoma Lawsuit Settlement loans can be an excellent option. Best of all, you don’t pay back if you lose, so you don’t have to worry about that nightmare scenario.

There were 10,128 crashes in Oklahoma in 2018, according to the Oklahoma Highway Safety Office. In those crashes, 12,717 Oklahomans were injured and 655 were killed.

That means one in every 310 Oklahomans was injured in a car accident in 2018.

Those statistics are frightening, and they make abundantly clear how something you never thought would happen to you.

In this situation, there can be some things going through your head.

The important rule to follow is to put safety first, which is why you should get your car off the road after an accident if that’s possible, and call for medical help and/or the police if you have to based on the circumstances of the law.

Also, make sure to exchange info with the other driver. If someone is injured or killed in the crash, you must immediately contact the police.

Oklahoma follows the same modified comparative negligence rule that many states follow to determine how much to award a driver after a car accident.

Additionally, even a driver who is allowed to sue can collect his or her share of the fault.

Let’s say a driver was 30 percent responsible for the accident. Under Oklahoma law, he or she may still sue, but the damages awarded will be 30 percent less than they would have been otherwise.

All of this assumes that you filed a suit within Oklahoma’s statute of limitations for car accident cases, two years from the date of the accident.

You don’t want to run past that deadline; if you do, the chances of a judge’s letting your case move forward are slim to none. That’s one reason to hire a lawyer as soon as you can after your car accident.

Another reason is to apply for a car accident loan from Delta Lawsuit Loans as soon after your accident as possible.

You become eligible for a pre-settlement cash advance only after hiring a lawyer, so if you want to apply, make sure to hire a lawyer first.

Slip and Falls in Oklahoma 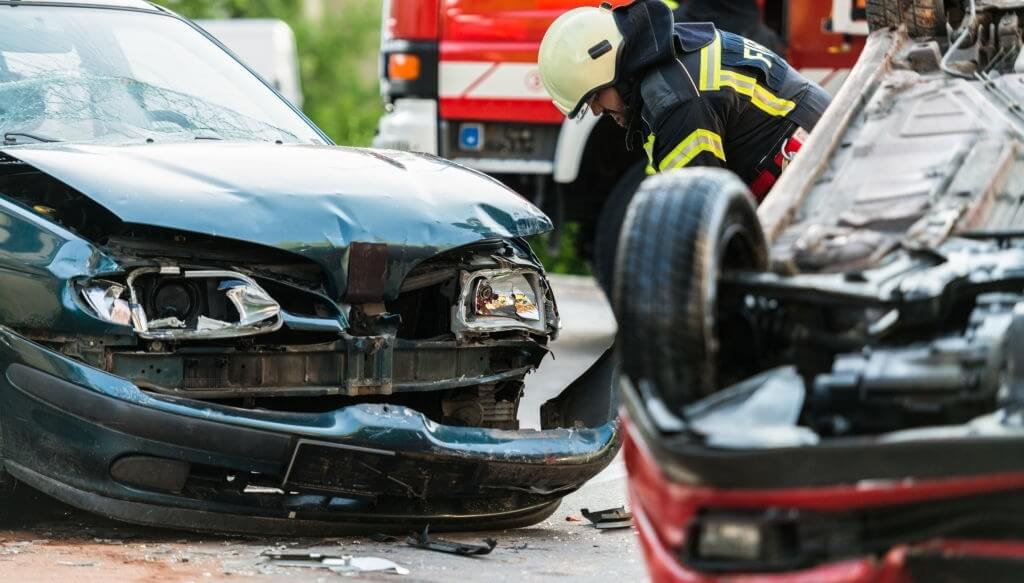 If you’re familiar with how car accident cases work in Oklahoma, it’s not too big a stretch to understand how slip and fall cases work.

After a slip and fall, which is a type of premises liability case in which someone falls on another person’s or entity’s property, Oklahoma instructs its jurors to find two things under its modified comparative negligence rule.

The first thing jurors will look for is damages.

How much did the accident cost you? They’ll look at your medical bills, whether the injuries you suffered kept you out of work and how much your lost wages totaled and your pain and suffering as a result of the incident.

If the accident cost you the permanent or temporary function of a body part or left you disfigured or paralyzed, either for some time or permanently, that will also be taken into account. As an example, let’s say the jury determines your damages to be $50,000.

The next thing they’ll decide is what percentage of the accident was your fault. In an open and shut case, that answer might be zero.

But in many cases, you can be found partially responsible for the accident.

They’ll look at methods the property owner may have used to warn you, whether you were in an area where you were permitted to be, whether you were doing anything that would have distracted you or made you more prone to slipping.

In this example, let’s say the jury found you were distracted by your cell phone and see you were 20 percent responsible for the accident.

Now, what if the jury found you to be more than 50 percent responsible?

In that case, you’d get nothing because Oklahoma’s modified comparative negligence rule bars you from seeking damages if you were more responsible for the slip and fall than the owner was.

This all assumes that a case went to trial; what if you settle? While this process might not be followed precisely, the property owner’s or his or her insurer’s lawyers will try to mimic the process to determine how much a jury would award you.

Therefore, the number they’ll come to in a settlement offer will be based on the modified comparative negligence system.

Similar to car accident lawsuits, slip and fall lawsuits may be filed for two years after the accident. After that, a judge will likely throw the case out.

When you apply for a slip and fall loan from us, we’ll speak with your lawyer about the details of your case and base our decision on the facts of your case.

We won’t speak to anyone about or ask you for your credit information and employment details.

Cities in Oklahoma that We Fund

If your accident occurred anywhere in Oklahoma or one of the other states we fund, we could consider an application for pre-settlement funding.

Examples of cities in Oklahoma that we fund include:

There are so many cities and towns in Oklahoma that we couldn’t fit onto this list. That doesn’t mean we don’t fund them, though!

No matter where in Oklahoma, we can fund it, even if it’s not on this list.

A Rich Heritage of Oklahoma

Before it was a state, most modern-day Oklahoma was the Indian Territory, where the U.S. government forcibly moved Native American tribes from the eastern part of the country to its center.

You can find many sites related to Native Americans in Oklahoma, including the Cherokee Heritage Center in Tahlequah, the Washita Battlefield in Cheyenne, and the museums of various Native American nations throughout the state.

Oklahoma City is also home to the National Cowboy and Western Heritage Museum, which documents the history of the American West.

Some other cool things in Oklahoma include the world’s largest peanut, in Durant, and the largest sculpture of hands in prayer in the world, in Tulsa.

How to Get Cash Advance from Us

There are three simple reasons to apply for a lawsuit loan from us, particularly as opposed to some other types of loans:

We don’t check your credit score or your employment history.
You can spend the money any way you want.
We get paid out of the settlement, and you don’t pay if you don’t win.

We think that’s pretty simple, but we’re happy to answer your questions. Give us a call any time of the day, any day of the week.

We’re genuinely here 24/7, and we want to help you decide if a settlement loan is the right move for you.

So call us today or apply on our website, and we can get you funded as soon as 24 hours after you apply!