A herniated disc occurs when the discs that cushion the vertebrae are pushed out of the annulus, which is the outer layer that surrounds the nucleus of the spine, and into the spinal canal itself due to a tear in the annulus.

Herniated discs are serious because there isn’t enough room in your spinal canal for both the spinal nerve, which should be there, and the disc, which shouldn’t.

Because of the limited space, the herniated disc will press up against the spinal nerves, which causes sometimes severe pain.

Herniated discs are more common in the lower back but can also happen in the neck. Wherever the herniated disc is along the spine is where you’ll feel pain.

If you sustained your herniated disc in an accident and you’re currently waiting to settle after hiring an attorney, you can apply here on Delta Lawsuit Loans’s website or over the phone for a lawsuit loan.

Lawsuit loans, also called settlement loans or pre-settlement cash advances, can give you a leg up while you’re waiting to settle.

It can take a while for a lawsuit to settle; it takes as little as a day to get herniated disc pre-settlement funding from us.

How Does a Herniated Disc Happen? 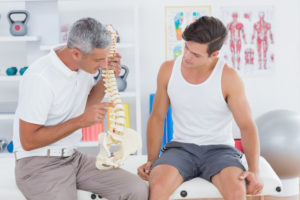 Healthy discs act to cushion and absorb shocks to the spinal bones.

That’s why healthy discs are on the outside, called the annulus, of the nucleus of the spine. When they move through a torn annulus into the spinal canal itself, they are called herniated.

A common cause of herniated discs, though not usually a reason to file a lawsuit, is aging.

The material of the discs themselves and the ligaments that keep them together naturally degenerate and weaken as one age, which results in herniated discs.

But the most common cause for filing a lawsuit after sustaining a herniated discs is a single strain or injury in a car accident, slip, and fall, or any other accident.

Sometimes, however, these two causes collide.

Someone whose discs are naturally weakened is more vulnerable to a herniated disc even if he or she has suffered only a minor strain or twist on his or her back.

After you’re medically able to hire a lawyer and you’re waiting to settle, it’s time to apply for a lawsuit loan from Delta Lawsuit Loans.

The herniated disc settlement funding you’ll get from us is yours to do whatever you want with.

You might want to pay off your medical bills or make up for lost wages, but that’s your business. Once you’re approved, you’re the only one who has any say over how you spend your money because it’s your money!

There are two categories of herniated discs in general and two areas along the spine they can occur.

The severity of the injury and of the pain depends on whether or not the herniated discs are pressing against a nerve.

Herniated discs that occur in the lower back, or lumbar spine, can put pressure on the sciatic nerve or the nerves around it, causing sciatica.

Herniated discs that occur in the neck, or cervical spine, can cause compression on nerves in the neck, called cervical radiculopathy. Moving the neck can increase the pain.

Whether your herniated disc is pressing against a nerve or not, or if it’s in your lower back or neck, Delta Lawsuit Loans may be able to help with a lawsuit loan.

Call us or apply on our website to find out if you could have cash on hand as soon as tomorrow.

How Do I Know if I Have a Herniated Disc? 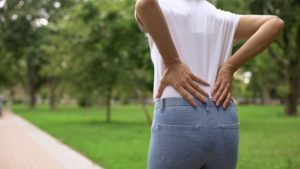 As we’ve said, when a herniated disc is not pressing up against a nerve, you might feel no pain at all.

But if it is, you could experience pain, numbness, or weakness in the places in the body to which the nerve that is affected travels.

The most common method is an MRI, although the American College of Radiology does not recommend MRIs unless symptoms have persisted for six weeks. X-rays are often used to complement MRI findings and are often used to rule out other causes of the back or neck pain.

Once your herniated disc has been diagnosed, or even if you suffered other injuries, it might be time to seek legal help.

Once you’ve done so, it’s time for us to come into the picture. We can offer a lawsuit loan that you only pay back when and if you win your settlement. If you don’t win, you don’t pay us anything.

How Do You Treat Herniated Discs?

Your doctor will probably attempt nonsurgical methods to treat the herniated disc first.

Some of these treatments include moderating one’s activity level to accommodate the pain and allow the inflammation of the spinal nerve to decrease. (Bedrest, however, is not recommended.)

In addition, when the pain is mild or moderate, your doctor might treat the herniated disc with nonsteroidal anti-inflammatory medication, which could be delivered directly to the site of the herniated disc using a spinal needle.

If the nonsurgical methods don’t work, your doctor may recommend surgery. Surgery can help, but it’s not guaranteed to work.

Once the pain has subsided and you’re waiting to settle, you could still have medical bills and other costs that piled up while you were convalescing and out of work.

To pay those off, or to do anything you want, you can use a lawsuit loan.

Delta Lawsuit Loans can provide a pre-settlement cash advance that you can use for whatever you want.

How Long Do Herniated Discs Heal?

Most herniated discs improve in a few days and are gone in four to six weeks. More severe ones, especially if they require surgery, can take much longer.

No matter how long it’s taken or is taking for your herniated disc to heal, Delta Lawsuit Loans can offer assistance in the form of a lawsuit loan. Call us or apply on our website today.

Financial assistance from Delta Lawsuit Loans can help you cover your medical expenses. Or other expenses that have come up since your injury.

Or literally anything else. Our business is helping you between your injury and your settlement, not deciding how to spend your money.

Because it is your money once we approve your request for pre-settlement funding.

Even better, your attorney will pay us back right out of the settlement, so you won’t even have to think about paying us out of your own pocket.

Medical information in this article comes from the American Association of Neurological Surgeons. Check out their full article.